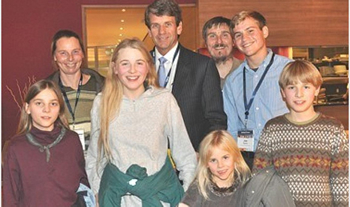 ‘Officers brought a battering ram and were about to break the door in’.

Four children, ages 7 to 14, have been forcibly taken from their Darmstadt, Germany, home by police armed with a battering ram, and their parents have been told they won’t see them again soon, all over the issue of homeschooling, according to a stunning new report from the Home School Legal Defense Association.

HSLDA, the world’s premiere advocate for homeschoolers, said the family of Dirk and Petra Wunderlich has battled for several years Germany’s World War II-era requirement that all children submit to the indoctrination programs in the nation’s public schools.

The shocking raid was made solely because the parents were providing their children’s education, HSLDA said. The organization noted the paperwork that authorized police officers and social workers to use force on the children contained no claims of mistreatment.

“The children were taken to unknown locations,” HSLDA said. “Officials ominously promised the parents that they would not be seeing their children anytime soon.”